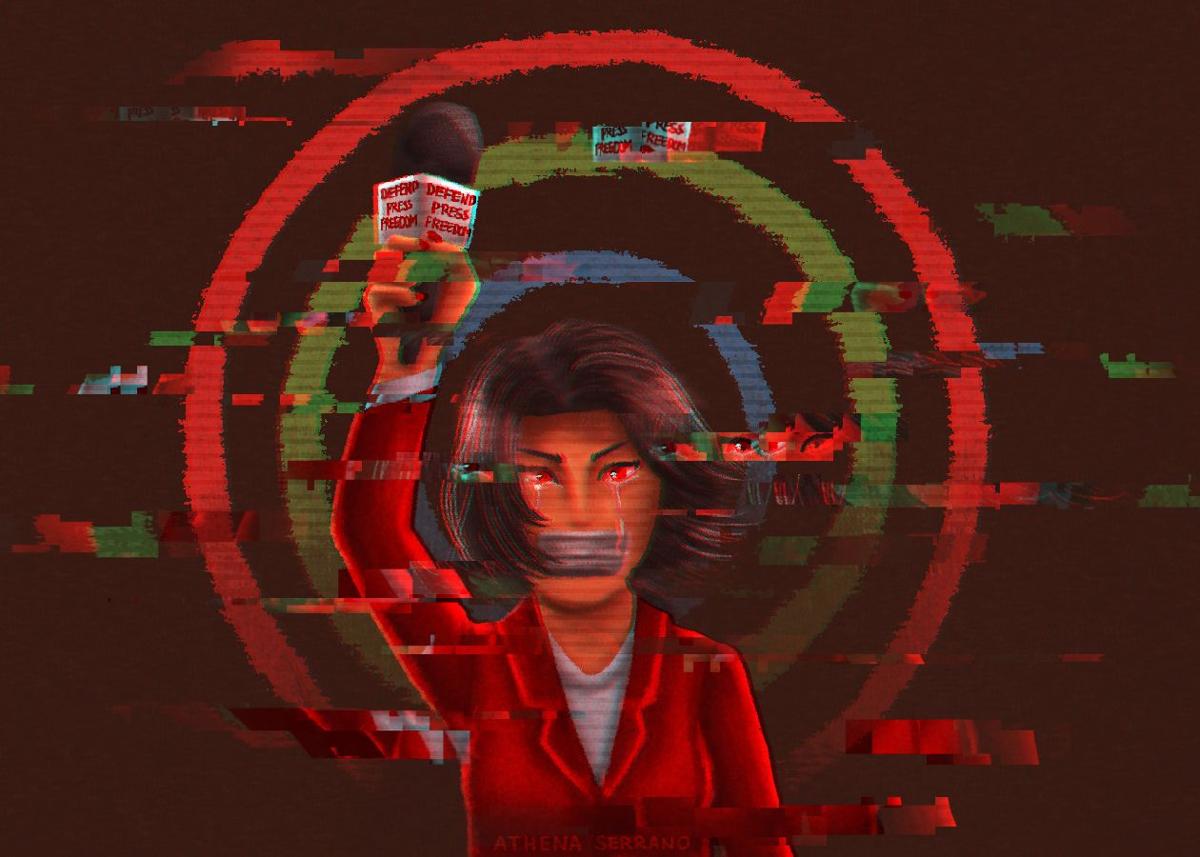 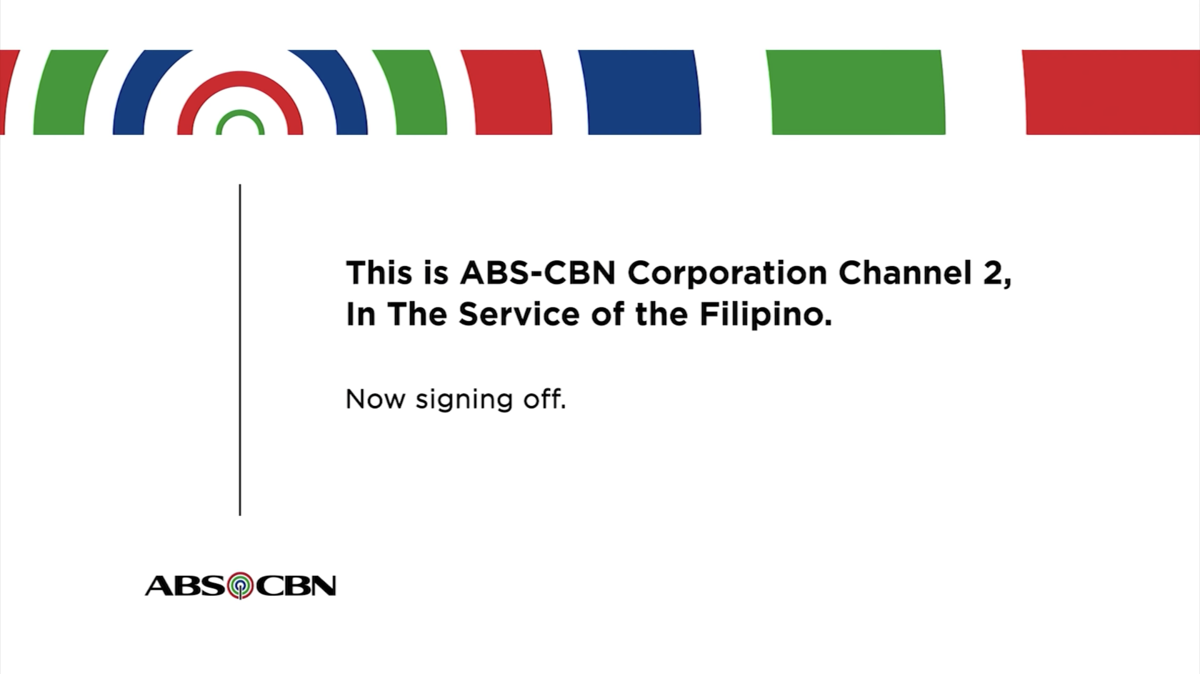 Sign-off message from ABS-CBN on May 5

Sign-off message from ABS-CBN on May 5

Two days after World Press Freedom Day, on May 5, at 7:52 PM Philippine Standard Time, the National Telecommunications Commission (NTC) of the Philippines issued a cease and desist order to ABS-CBN, the media giant of the country and one of the oldest broadcasters in Asia.

The order forced the corporation to end its television and radio broadcasting, but just before going dark, the network aired a heartfelt message thanking all viewers for watching them over the years. The national anthem of the Philippines played, while the names of all of the networks’ engineers and local TV stations were listed on screen.

This shutdown, however, is not the first. The last time it occurred was in September 1972, when then president, Ferdinand Marcos, declared martial law in the Philippines.

Those who are not of Filipino descent may not be familiar with the influence ABS-CBN has in the Philippines, but it can be compared to the ABC and NBC networks in America. Millions of Filipinos relied on ABS-CBN broadcasts for news and entertainment.

Even the Filipino diaspora living abroad in different countries would frequently watch the ABS-CBN network. If you have ventured into a local Filipino restaurant or a laundromat in Jersey City with a large Filipino-American population, you may have seen a broadcast from ABS-CBN’s TV Patrol news or a Filipino soap opera on a small TV mounted on the wall. These programs would be aired through TFC (The Filipino Channel), which is owned by ABS-CBN and allows their broadcasts to air internationally.

As a Filipino-American student journalist with friends and relatives living in the Philippines, I am terrified for the future of our ancestral country because of this shutdown.

What led to the broadcast shutdown?

Since 2016, ABS-CBN has been a frequent target by Philippine President Rodrigo Duterte. It all began when he alleged that ABS-CBN refused to broadcast his campaign ads during the national election that same year and instead, favored a negative ad paid for by Senator Antonio Trillanes, who was, at that time, a critic of Duterte’s and a vice presidential candidate.

Upon his election, ABS-CBN became one of the major news outlets reporting stories critical of Duterte’s administration. Duterte has been under scrutiny for alleged human rights abuses, vocally supporting extrajudicial killings of drug users and dealers, allegedly operating death squads and declaring a national war on illegal drug trafficking.

Throughout his presidency, Duterte openly expressed his dislike towards ABS-CBN throughout his addresses. In December 2019, Duterte angrily stated that ABS-CBN would not be going through its 25-year congressional franchise renewal, saying the franchise “will end next year” and he “will see to it that you’re out.”

A couple months later, in February 2020, Philippine Solicitor General, Jose Calida, petitioned the Supreme Court for a repeal on the ABS-CBN franchise. He accused the corporation of illegal foreign ownership and committing unethical business practices without approval from the NTC.

ABS-CBN has denied these allegations and maintained that it was following all the laws and had gained all government and regulatory approvals.

The corporation has applied for franchise renewal over the years, and several bills have been pending in the Philippine Congress for approval. The COVID-19 outbreak disrupted plans to hold any hearing. However, the NTC had assured that ABS-CBN was allowed to broadcast even past the May 4 expiration date.

Reactions from Filipinos and the Filipino Diaspora

The shutdown ignited outrage and sadness on social media platforms, especially Facebook and Twitter. Hashtags #NoToABSCBNShutdown, #IStandWithABSCBN, and #DefendPressFreedom have trended in the Philippines on Twitter. Candles were lit and placed in front of ABS-CBN’s main office in Manila.

“A lot of students really worry that this [shutdown] is an attack to press freedom, which is one of the guaranteed rights in the [Philippine] Constitution,” said Clark Trovela, a student from the University of Philippines Diliman.

According to the Southeast Asian Media Report published by the International Federation of Journalists (IFJ) in 2018, Philippines is ranked as one of the deadliest countries for journalists in Southeast Asia.

The Maguindanao massacre in 2009 was the single deadliest event for Philippine journalists, with 34 journalists being murdered. During the Marcos regime between 1965-1986, he infamously suppressed journalists and killed thousands of Filipinos who dared to oppose him. Since ABS-CBN had shut down once during that regime, many have begun drawing parallels between Marcos and Duterte.

Duterte has not only feuded with ABS-CBN, but he has also disagreed with other news outlets such as Rappler. If ABS-CBN can be forcefully shut down by the government, what is next?

Other Filipino-American students at Saint Peter’s University are also concerned after learning of the shutdown.

“I honestly can't say I was surprised, considering the man leading the country is considered to be a dictator. The people in the Philippines have a right to be informed about what’s going on by receiving the news,” said Justin Mamaclay, a junior at SPU.

Additionally, the shutdown has affected Filipinos culturally. ABS-CBN has not only provided news, but it has also given so many different programs that Filipino youth and their parents grew up watching.

I have memories of watching a kids’ sketch comedy show Goin’ Bulilit (Goin’ Little) and a game show Game Ka Na Ba? I can still remember the theme song for the former and the response phrase “game na” when the title for the latter is recited.

My mother, especially, is also concerned about the future of teleserye, or Filipino soap operas. Watching teleserye is a favorite pastime commonly shared among Filipinos and the Filipino diaspora. Many acclaimed drama series and even some of the highest grossing films in the Philippines have been produced by ABS-CBN. With the franchise renewal put at risk, we could lose a major part of our culture.

On May 7, ABS-CBN announced they would legally live stream TV Patrol broadcasts on their website, YouTube and Facebook for free. Additionally, they have filed a petition with the Philippine Supreme Court, requesting the NTC cease-and-desist order be ruled null and void.

As of May 13, the House of Representatives passed a bill to grant ABS-CBN a temporary license to resume airing until October 31, 2020. The bill still needs to be approved on a third and final reading before directing it to the Senate. If it reaches a majority support, the bill would finally be sent to President Duterte to sign for approval.

Currently, television and radio broadcast still remain unavailable. Concerns have been raised about the many low-income Filipinos who do not have Internet access and how they would gain reliable news about the ongoing COVID-19 pandemic in the country.

I was raised to not discuss Philippine politics due to the fear of possibly getting myself or my family in trouble. My parents grew up during the oppressive Marcos dictatorship, so I was able to understand their concerns. But now, I will not hesitate to say that I firmly stand with ABS-CBN and condemn the moves of the NTC and Duterte administration as an attack to freedom of the press and an endangerment to the lives of the Filipino people, especially amidst this pandemic.

I acknowledge that I am privileged to live in a country where freedom of speech, expression, and freedom of the press are very strongly protected by the U.S Constitution. I do not have to worry about my physical safety or being targeted by the federal government if I express criticism.

But just because those rights are protected, that does not mean that you should never stop worrying about them being taken away. History has shown the rise of tyrannical leaders who could gradually strip away human rights, and you may not even realize it until it is too late.

As a student journalist, it is important to use my position to help inform and educate others about the importance of freedom of the press. It is something we should never take for granted.

Freedom of the press has been the foundation of many ideas, opinions, and experiences that have allowed people to expand their knowledge and explore opportunities for different ways of thinking. It has even been a form of checks and balances for the people over their governments. Without it, there is no democracy