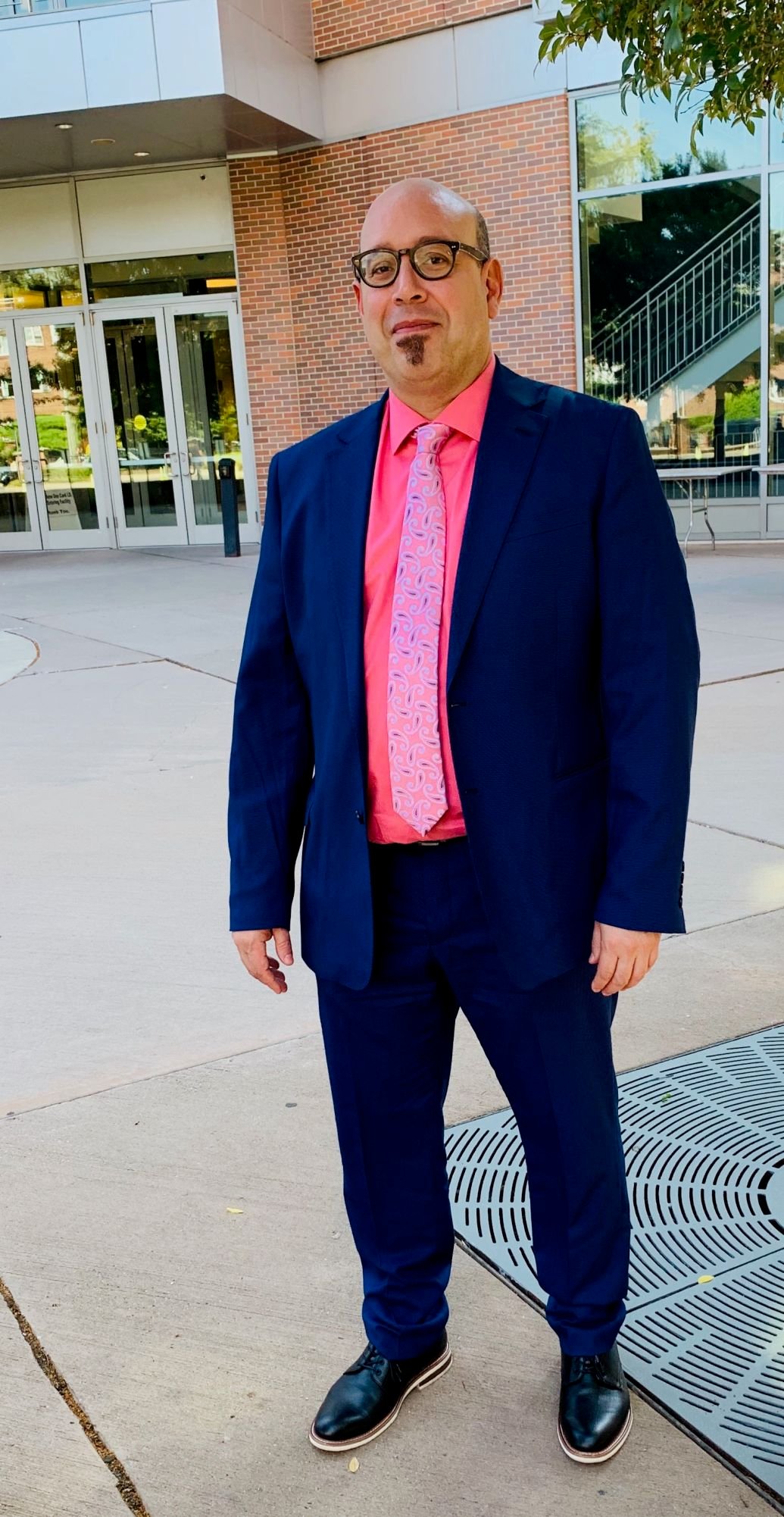 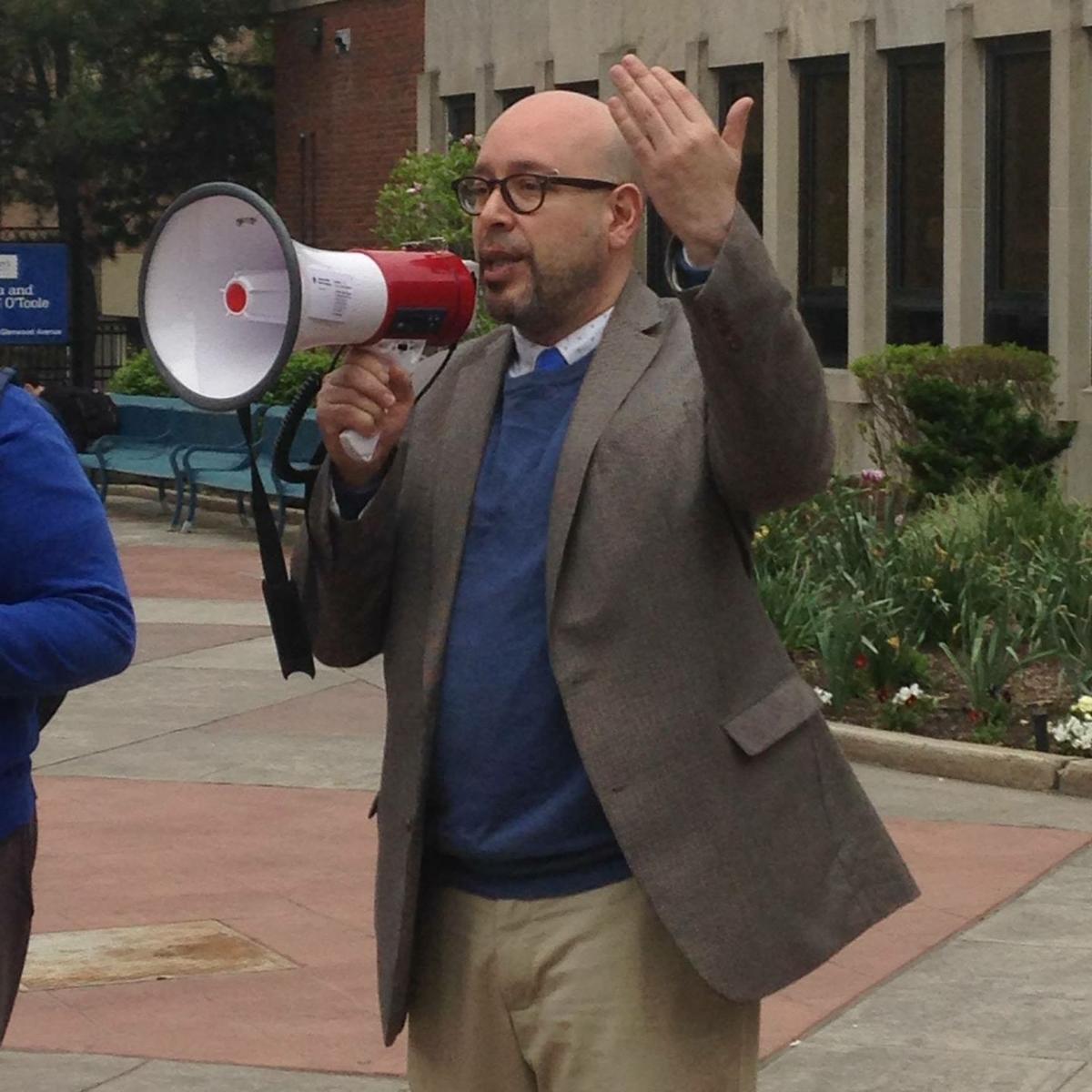 Dr. Edgar Rivera Colon speaking to students as he encourages them to speak up and use their voices.

Dr. Edgar Rivera Colon speaking to students as he encourages them to speak up and use their voices.

On the first day of classes, he makes all of his students fill out index cards with their names and fun facts about themselves. He takes this extra effort because he wants to do more than simply remember his students’ names. He also wants to get to know them.

That is Edgar Rivera Colon, PhD, a professor who encourages his students to speak up inside and outside of the classroom.

Whether he is seen on campus talking animatedly to a student while gesturing passionately with his hands or giving one of classroom life lessons, Dr. Rivera Colon is a big part of the Saint Peter’s family.

Although he is a professor who has lived in Jersey City his whole life, he has now made the decision to leave Saint Peter’s and Jersey City.

Effective June 30th, Rivera Colon will no longer be an Assistant Professor at Saint Peter’s University; instead, he will be moving to California to be with his family.

He will miss his home, but he said that he is excited to make the move to East Los Angeles.

“It’s like living in a Latin American city,” he said. “It’s nice in this part of my life to start something new.”

After five years at Saint Peter’s, Rivera Colon hopes that his students stay strong and succeed, just as he says they have helped make him a better teacher.

“I realized early on that I needed to frame the teaching in the context of the lives my students were living and to be very clear to them about what they need to do in the next step in their lives,” he explained. “A lot of the work of teaching at Saint Peter’s is not only teaching, but also saying to students ‘prepare for the next steps, and these are the resources for you to do that.’”

In California, Rivera Colon thinks that he will most likely end up teaching and doing research, but his main priority is being in California and enjoying it. In the meantime, he will continue to teach online at Columbia University.

He knows that change is difficult, but he is confident in Saint Peter’s Jesuit tradition of pursuing social justice.

Saint Peter’s, he said, “is an institution that values social justice and spirituality. That’s a key connection that lasts longer in the struggle for social justice.”

But Rivera Colon does not think Saint Peter’s is perfect. He says that there is a diversity problem amongst faculty that is currently being addressed, but it needs to be addressed more intensely in the coming years.

Despite that, he explained that he has seen a lot of diverse hires compared to when he first started, and a surge in development of great leaders in the Latin community makes him happy and proud.

What is his favorite thing about Saint Peter’s?

“My favorite thing about Saint Peter’s is that a lot of people including students, faculty and staff, are first-generation in terms of college or PhD, and I think that gives the place a different quality. There is not a lot of snootiness. It’s a very down to earth, grounded place,” he said.

Although he will be moving across the country, Rivera Colon wants his students to be proud of how resilient they are. Getting to know them has been one of his best experiences.

“To get to know students and the way they manage their lives is very admirable. They have to be multi-taskers. I understand that, but it’s also a lot of stress. I’ve really enjoyed some of the work I did with the undocumented students at The Center for Undocumented Students with the healing circles. That’s been very important work for me,” he explained with pride.

Rivera Colon is a first-generation student, and comes from a poor, working class background. This has played a major part in helping him relate to his students.

“I’ve been teaching people in my home city that are very similar to me in background,” said Rivera Colon. “I see it as teaching people that I care about and are a part of my community.”

His message to students is this: “The most important thing that they can remember is that they have really all the basic human qualities to move forward. They may need some skills or tools, but because they come from communities of struggle, they are resilient.”

He wants his students to know that they are capable, and he hopes that Saint Peter’s continues to grow and remain an institution that is accessible to many students who depend on it.

Saint Peter’s has gone through a rough patch these past few years. Many people are overwhelmed at Saint Peter’s, and they have a lot on their shoulders. There are also widespread economic difficulties, explained Rivera Colon.

He said, “The thing that I worry about is the resources. I worry about the economics. Will Saint Peter’s be able to survive in the next five to ten years?” Rivera Colon hopes that it does.

Not only does he hope to see it continue as an institution that supports and is accessible to low-income, working class students, but he also hopes that it grows and remains grounded in its community, commitment to social justice and Jesuit tradition.

After all, “We are not a university anywhere; we are a university here in Jersey City, in Hudson County, in Northern New Jersey. That is part of our identity that must be preserved, and I think that will happen.”

This identity and his students help him understand that what he calls the main crises in effect – widespread gentrification in Jersey City, the climate and health crises, the collapsing economy and hollow political parties – will be met head on with community work and activism.

Although he is moving to California, he will be taking Jersey City and Saint Peter’s with him to continue the struggle for justice, and despite all of the chaos currently going on in the world, Dr. Rivera Colon has one final message for his community:

To Jersey City and Saint Peter’s he says, “Stand up, organize and fight.”