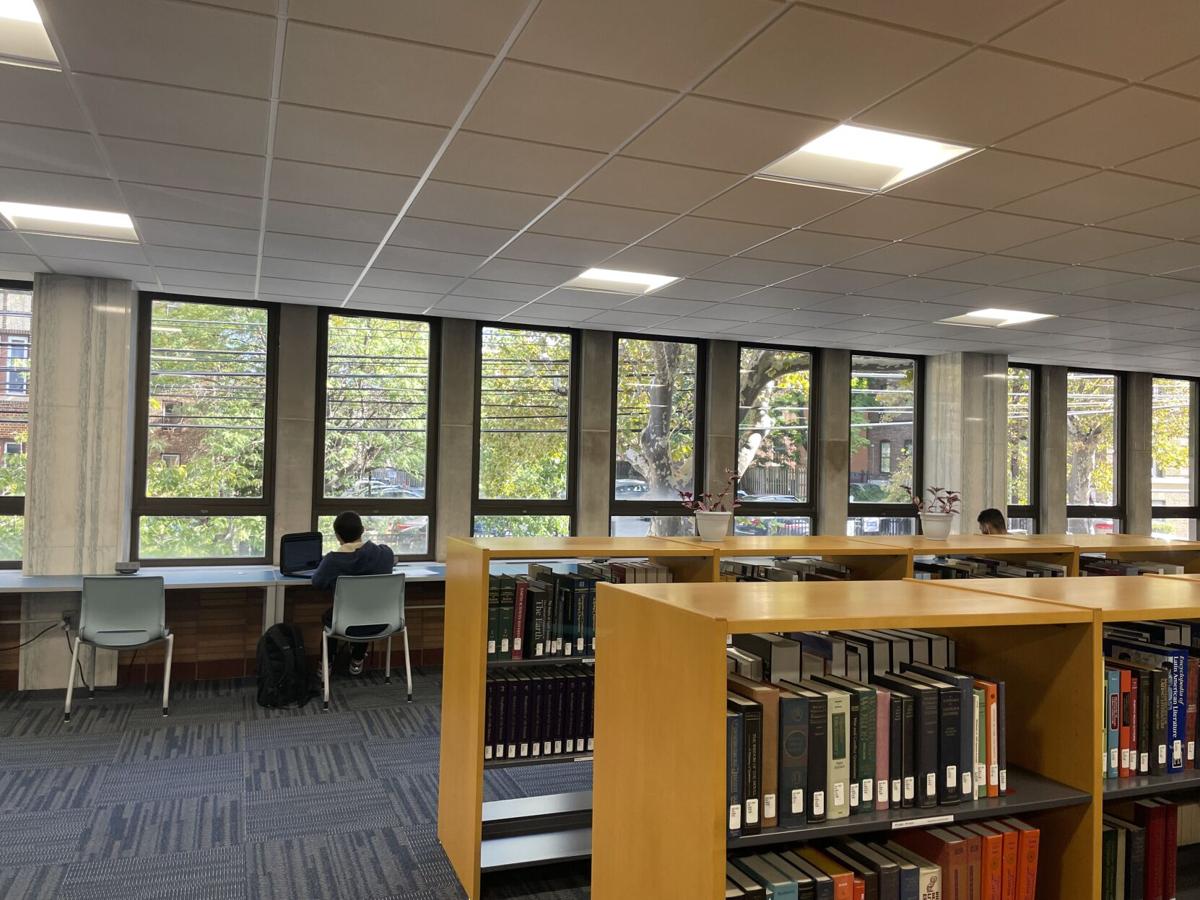 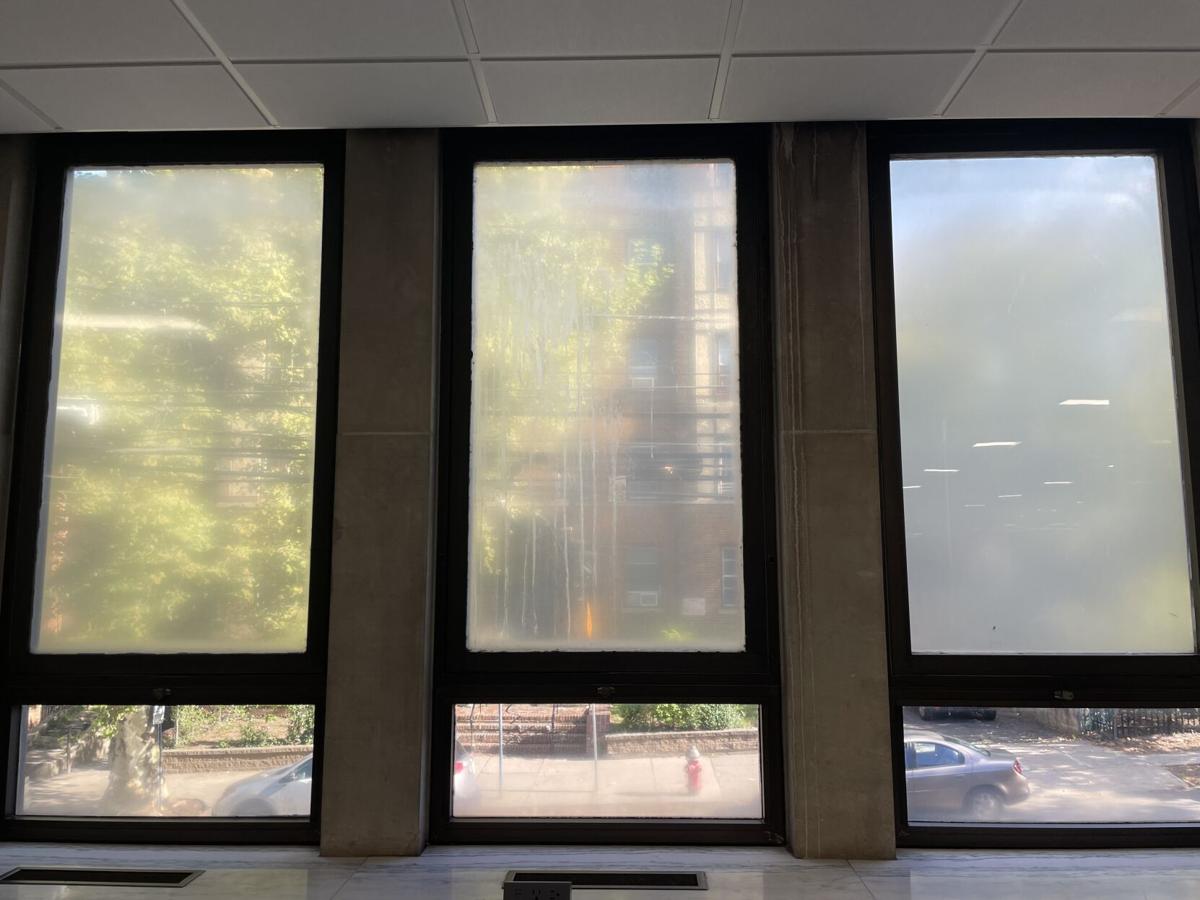 The old windows at the O'Toole Library. Photo by Chrismarlyn Martinez.

New improvements are coming to the Saint Peter’s University library. A $250,000 grant was just awarded by the Theresa and Edward O’Toole Foundation, and will be used to replace the north wall windows, refine the library’s air conditioning system and embellish its appearance.

The primary objective of the library’s administration is to solve issues of high humidity and low temperatures during the winter. The current windows are from 1966, when the building was constructed. Over time, there has been some damage and the seals that prevent air from passing through the windows have ceased, according to the library’s director, Daisy Decoster.

Junior Jamie Suarez, communications major and junior, agrees with the window investment. She recalls visiting the O’Toole Library during the fall mornings of November, and having the “cold wind blow lightly at her desk” while studying. Suarez hopes that the new window can solve this problem, improving the study quality of the library.

This investment aligns with Saint Peter’s University’s sustainability commitment and its Climate Action Plan; a plan responsible for making infrastructural decisions favorable for the environment while creating environmental leaders for future generations.

DeCoster is very eager for the new improvements, and hopes that the new windows can solve the ongoing issues of humidity that affects the students and the books.

“People like to study in a well-lit, comfortable environment,” she said. “Hopefully new windows reduce the strain on the HVAC system by simply keeping the outside air out.”

This grant was only one of many contributions the library has received from the O’Toole foundation. According to DeCoster, Theresa and Edward O’Toole were Jersey City natives who made millions of dollars selling religious clothings and supported many Catholic organizations. They also gave a significant donation in 1966 for the construction of the library, which is why the library is named after them.

The first floor of the library, which is now called the Digital Research Commons, was also recently renovated. Filled with different tones of blue lounging chairs with charging outlets adapted to the left side of the cushions, the O’Toole library has enhanced it’s space. In fall 2020, new desktop computers, book shelves and beautifully arranged plants were added to the space along with improved lighting and faster Wi-Fi. The library is deeply committed to helping students achieve their academic success, and these recent investments reflect this goal.

“I think it's pretty miraculous that the Theresa and Edward O'Toole Foundation continues to support Saint Peter's by helping to revitalize the very building that bears the O'Toole name. We're very grateful to have this history of philanthropic support,” DeCoster said.

In a press release issued on the Saint Peter’s University website, Eugene J. Cornacchia, Ph.D., president of the university, expressed his gratitude towards the foundation for its donation to the library.

“We are grateful to the O’Toole Family and O’Toole Foundation for their generosity, which has enabled us to create and maintain this space that has served generations of Saint Peter’s students,” he said.

Saint Peter’s students seemed to be enjoying the refinement of the first floor Digital Research Commons. DeCoster says the library is busier than ever after the renovations, and that the chairs and tables along Glenwood Avenue always tend to be occupied.

Senior Karina Diaz, communications major and senior,chooses to visit the library amongst other places on campus to study.

“The library just provides that sense of security and privacy,” she said.

Jamie Suarez explained that the library provides a space for students to enjoy personal time along with doing their homework. She distinguishes the O’Toole library from other places on campus because it provides peace and quiet.

“If I need some ‘me time’, the library definitely gives me the opportunity to enjoy my own company while doing my work,” Suarez said.

The renovations for the Theresa and Edward O’Toole library will continue with new collaboration rooms on the first floor. The new rooms will have new furniture and technology. The space will be open and can be reserved to support study sessions, video conferencing and meetings.