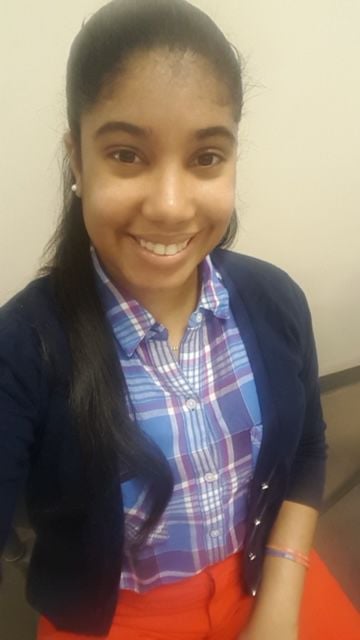 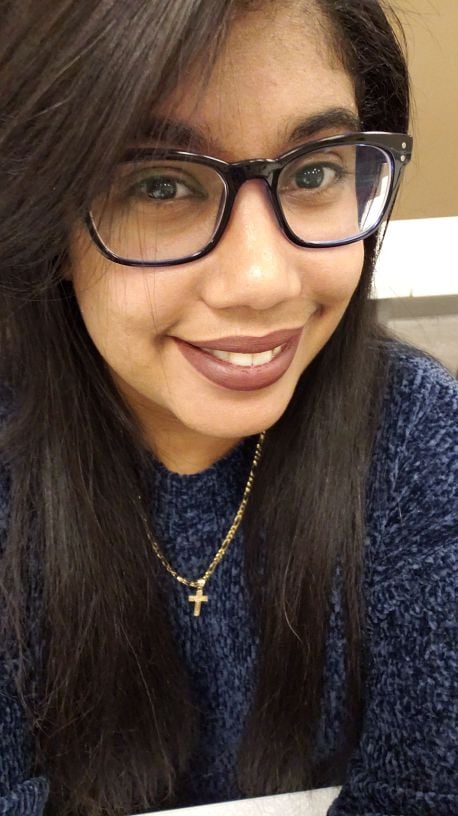 As her newswriting class had come to an end, while most of Graymi Angeles Marte’s classmates headed off to another class, to lunch, or to study elsewhere on campus, she was headed to work.

“We do everything; we go from the teller, processing cash transactions, to helping people opening accounts, closing accounts, opening business accounts,” said Angeles.

She said this jack-of-all-trades style work has served her well.

“It was easy for me to get to know everything; you get more experience, if you end up wanting to do something else.”

Aside from experience, Angeles’s job helps with her educational finances by paying for half of her tuition. Her job also offers her tuition reimbursement.

“Whatever I pay to [my] loan, they give back to me at the end of the semester,” said Angeles.

But while banking is serving Angeles well, she has other plans that may take her elsewhere— like into the world of journalism, a field she’s worked in before.

“I want to do broadcast journalism, or work on radio stations,” said Angeles.

At 27 years old, she has developed a love for communication which began in her home country, the Dominican Republic.“Ever since I was younger at the age of 6 or 7, I was always exposed to presenting at school activities. I would perform throughout dances, acting for Independence Day activities, etc.,” she said in an email.

For Angeles, juggling work and studies has been the norm since high school.

“I used to sell lottery tickets. I was in high school and I was going to work in the afternoon. I worked the whole week. It did help me a lot because I had to be exposed to people. I learned how to talk to people and how to express myself in public. That opened the door for me to get the job I have today in the bank as well.”

She wasn’t always interested in communications. As a child, she wanted to become a lawyer.

Angeles came to the United States in 2011 at the age of 18, and the timing of the move led to her heightened interest in journalism.

After finishing high school, her family was in the process of acquiring visas to live in the U.S., following a trend among their relatives.

“Most of my family was already here. That’s pretty much why we came. I have family here that’s been here since the 80s.”

For some of her relatives, the migration was notably challenging.

“On 9/11, my grandma had the appointment to go to the embassy to get her visa. When she was waiting to be assisted, they had to take everybody out, shut everything down. On Sept. 23, she was able to come in. She has been here for almost 20 years now.”

Now her own family’s turn to migrate was approaching. Rather than begin college in her home country and be quickly uprooted, Angeles took courses and was able to land a receptionist position at a local T.V. channel. It was there that the door to the media world opened to her.

“In the same building there were radio stations, so I got the chance to see how they worked, and I asked some of them how they got into it. Someone told me that all I had to do was a course that took 6 to 12 months to complete in order to get a license to work in a radio program, and so I did,” said Angeles.

If she had stayed in D.R., her radio connection could have created a career for her.

“Right before I came to this country, they actually offered me a position there in a program they were going to do.”

When Angeles first arrived in New Jersey with her parents and siblings, things were tough. They found themselves sleeping together in one room of a friend’s house for the first months.

Angeles was able to land herself a job quickly, however. She worked in a restaurant kitchen making appetizers and desserts. The job helped her learn to communicate in her new country.

“I learned a lot. I got to learn a lot of English, because I got to practice with a lot of people.”

“Over there they have English Majors, but I wasn’t interested in studying English itself because I didn’t want to become a writer or anything like that. I’m more of a talker,” she said.

Angeles currently lives in West New York with her husband. Whether she finds a place for her talent and passion at the bank or returns to broadcast journalism, she is pleased with where she’s at right now.

“I really like living here. I work in Journal Square so it’s easy for me to come from work to school here. My job pays very well, and it pays almost half of my tuition here.”

Due to the ongoing COVID-19 pandemic, many businesses have made their employees work remotely from their homes, or in some cases, they have shut down entirely. However, banks are determined to stay open for the time being, and so Angeles is still behind the teller’s glass, albeit now wearing gloves to handle people’s money. She maintains a bold attitude despite the circumstances.