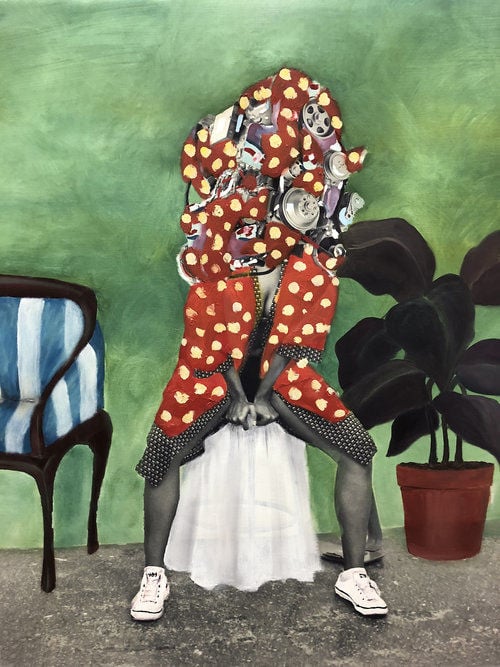 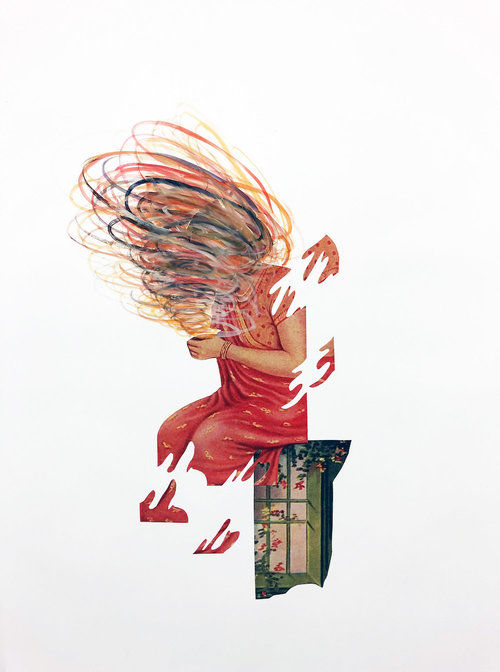 Whatever you do, don’t put Maya Varadaraj— or her art— in a box.

Born in the U.S and raised in Southern India, the 29-year-old multidisciplinary artist is well versed in what it means to slip seamlessly between identities. Both the culture of India and the culture of the United States are ingrained in her forever, she claims.

This has given her a unique perspective in the art world, though it has its pitfalls.

“People expect me to distinguish what I am and what I do all the time,” Varadaraj explains. “But I don’t think it’s relevant anymore to label yourself as just one thing.”

This is a recurring theme in Varadaraj’s artwork, which seeks— often through surprising mediums — to delve into the spaces “in-between.” In between America and India, yes, but also between tradition and progress, oppression and liberation, and womanhood and objectification.

Today, Varadaraj is based in NYC.

She’s also had an art studio in Jersey City for the past seven months. It’s here, Varadaraj claims— where she’s found not only an inclusive and creative community—but people who are genuinely interested in art and culture too.

Her upcoming exhibit is a collection of mixed media images called “The Woman and the Machine,” which will be her first show in Jersey City. The exhibit will run from February 22nd to June 7th at Mana Contemporary, a cultural center located ten minutes from Journal Square. Admission to the exhibit is free.

The art project’s ultimate goal is “to challenge pre-existing imagery that usually sexualizes the relationship between women and machines,” Varadaraj said.

One of Varadaraj’s earliest works was an installation piece called “Khandayati”— the Sanskrit word for “to break.”

The project began after Varadaraj stumbled upon a news article about a woman in India who died by suicide after being violently gang raped. Varadaraj was so moved by the story that she decided to research further. That’s when she realized she could use her art to continue the conversation.

“Ever since I was a kid, I wanted to help people,” she said. “I think making art about relevant issues is one way of getting people to talk about what can be done, and propel social change.”

Varadaraj was particularly struck by the discovery that the area where the rape occurred— a state in Northern India known as Uttar Pradesh— had the highest rate of gang rape in the country and was also the largest manufacturer of glass bangles in India.

For Varadaraj, this was a correlation that couldn’t be ignored.

Glass bangles are worn by married women all over India to represent their devotion to their husband. When a woman becomes a widow, the bangles are smashed violently off her wrists using a hard object. If a woman breaks the bangles before her husband’s death, she is considered a misfortune to the family, a tradition which Varadaraj believes “places the woman below the object.”

“Growing up, I would always be told, ‘Oh my god, don’t break those,’ Varadaraj recalled. “So I decided to break [the bangles] deliberately, and transform them into something empowering to women.”

In order to transform the bangles, Varadaraj developed a unique machine comprised solely of objects from the domestic realm. The final product was part wet grinder (a common kitchen appliance used in India), part vacuum cleaner, and part microwave.

After the bangles were crushed to shards by the grinder, they would be transported through the vacuum cleaner, and melted down in a microwavable kiln. From there, the remains of the glass bangles were reconstructed to take the form of chakras, a circular disk traditionally used as a weapon in India.

“Chakras are what the goddess Durga uses to wipe out ignorance.” Varadaraj explained. “She is the strongest manifestation of female energy, so I thought that was pretty fitting.”

Varadaraj views her upcoming exhibit at Mana Contemporary as a continuation of the work she began in “Khandayati.” This time, though, she’s expressing her ideas through collages, and taking aim at pop culture in India, which she believes can promote “a sort of underlying propaganda.”

“I chose to make collages with calendars because a lot of them have illustrations of women in very passive postures— playing with their kids, or drinking tea, or doing household chores,” Varadaraj explained. “Never are they doing anything that is empowering or of their own identity.”

For Varadaraj, the act of transforming objects from her upbringing— from kitchen appliances, to glass bangles, to calendars —is deeply meaningful. But that doesn’t mean it’s easy.

“Creative fields are difficult because there’s never a right answer,” Varadaraj says. “Sometimes I wish I was at a job that I know could be finished.”

She maintains that the most rewarding part of being an artist is not the outcome. It is rather the growth that comes along with the creative process.